Four times last Saturday I found myself lying in the prairie. Each time I got up, I walked away with an interesting photo.

I had gone to Soapstone Prairie Natural Area to be lost in that sea of brown grass and blue sky, to admire the hardy plants and animals that live there, and as always, to clear my mind. With their limited rainfall, cold winters, hot summers, and powerful winds, shortgrass prairies can be foreboding places. I’m still figuring out why, but for some reason this is the kind of landscape that most attracts me.

Understandably, not many other people feel this way, but I want them to. Hundreds of amazing species depend on the shortgrass prairie. There’s something spiritually healing about it. There’s not much left.

So four times last Saturday I laid down to take pictures of the plants and animals that live there. They’re not easy to notice, but I want you too. 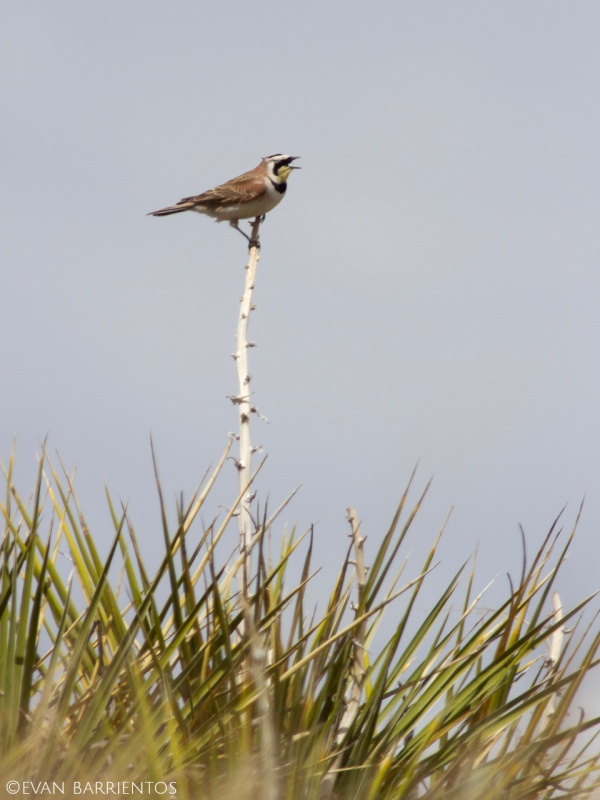 Horned Larks rarely let you get close enough to admire their bold masks, the pale yellow on their throats, or the feathers pointing above their heads like horns. But if you pay attention, their sweet tinkling voices will brighten your prairie hikes. I heard their call as I was hiking and looked in time to see a pair land near me. As they foraged for insects on the ground, I pulled out my camera and began crawling over the sharp rocks, stems, and dozens of tiny pincushion cacti. After much pain and silent swearing, I got close enough to take a decent photo of this lark singing on an old yucca stem. I think I would’ve gotten closer, but a group of mountain bikers scared him away.

Shortgrass prairie plants are tough. Those that manage to bloom in spring are remarkable. However, most people probably wouldn’t notice them. One of their adaptations that help them survive the prairie’s fierce winds is growing close to the ground. After a few weeks, these oversized flowers will disappear and no one will notice their minute, drought-adapted leaves. But on Saturday, they shined in their full glory, and I was there to capture it.

Okay, here’s a subject that people will have a harder time appreciating, but don’t scroll past yet. Take a good look this spider. It’s standing on water. Come on, you know that amazing. A small pool of water was a rare find in the prairie, so I made sure to take a close look at the life that inevitably would be drawn there. These spiders were there clinging to the grass poking above the surface. When I disturbed them they would run across the water like it was solid ground.

The last find was the least expected. I was headed back to my car when I spotted the tops of three Pronghorn’s head poking above a hill. Because of the hill, the Pronghorn hadn’t seen me yet, despite the fact that I was closer than I’d ever been to one outside of a vehicle. So I took out my camera and started crawling up the hill on my raw elbows again. When I was almost close enough to photograph them, one spotted me and alerted the others, so I now had three heads and six ears pointed right at me. Because they could only see the top of my head and the wind wasn’t blowing my scent towards them, they didn’t know what I was. Instead of running, they just stood there, staring and snorting. I hoped that if I waited long enough their fear would pass and I could begin crawling again. Two of them did go back to eating, but the one that first spotted me continued to stare and snort.

So I ran out of patience and decided to crawl just a little further. They all looked at me again, but they still didn’t run. When I looked through my camera’s viewfinder I saw that I was still too far below them for a good photo. Because of the low angle, the Pronghorn seemed to grow seamlessly out of the prairie, which created an image that I liked, so I kept crawling and photographing. None of the photos I took are conventionally beautiful, but I think that they show what it feels like to stalk Pronghorn on the prairie. It doesn’t show you what my elbows felt though, so here’s a photo of that.

When people come to the prairie, they don’t envision it filled with life, but they should. On my hike I saw Pronghorn, Black-tailed Prairie Dogs, Coyote tracks, a hawk, American Kestrels, Horned Larks, nine species of insects, and three species of blooming flowers. There’s a lot to love here; you just have to slow down to see it. And no, you don’t have to rest your body on cacti; just photographers do that.