I was walking along beautiful Quake Lake when I startled a snake resting on the rocky shore. He gracefully slid into the water and disappeared in the blue shallows. Ironically, I later identified the species as a Western Terrestrial Garter Snake (Thamnophis elegans). After taking a few more steps I startled another. Pausing to scan the rocky shore more carefully, I spotted two more. What was going on? Why were so many snakes drawn to a frigid lake on a chilly day?

After a while I noticed a pattern in their behavior: a snake would enter the water, go for a one-minute swim, return to the shore, and rest for about five minutes before repeating the process. I tried to follow them into the water to but would lose sight of them if they went too deep. Finally, one snake stayed in the shallows I saw what he has doing: hunting minnows!

Upon entering the lake, the snake first poked his head underneath some rocks, probably trying to flush the minnows out of hiding places or maybe looking for crayfish. When the snake located a school of minnows he went bezerk, rapidly undulating in a wide “s” with his pink mouth wide open. Compared to the quick and agile minnows darting about, the snake seemed hopelessly slow and clumsy underwater. I never saw one grab a fish, but the snakes must have succeed somehow; otherwise why would there be four hunting there? 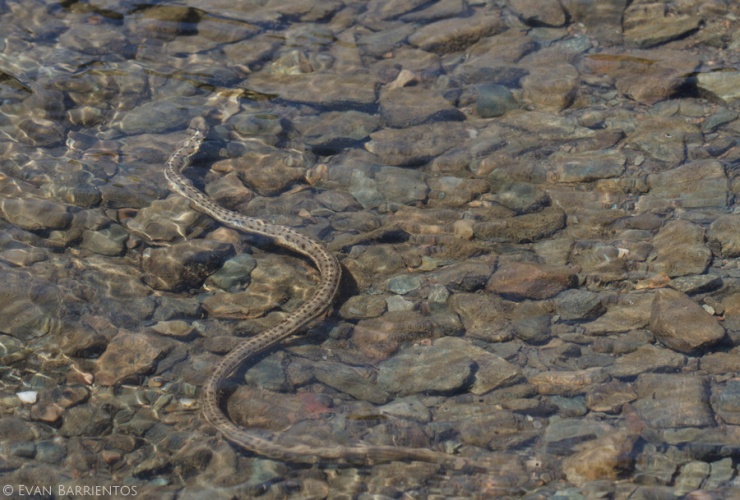 I asked Dr. Stevan J. Arnold about this behavior and learned that there are two distinct types of Western Terrestrial Garter Snakes. The one I saw is found on lakeshores and eats primarily fish and leeches. Interestingly, these lakeshore snakes grow faster, die younger, and breed more frequently and copiously than Terrestrial Garter Snakes that live in meadows and feed primarily on slugs. According to a paper that Dr. Arnold co-wrote, this is partly because lakeshore snakes have higher rates of predation and more consistent sources of prey. From another paper I learned that these lakeshore snakes shift their diets from year-to-year based on what prey is most available. Toads seem to be their preferred prey, but they’ll switch to fish when toad populations decline.

This information reveals how remarkably adaptable Terrestrial Garter Snakes are. As if it weren’t impressive enough for a cold-blooded species to hunt in a frigid lake, they also adapt their hunting behavior and even their growth and breeding traits in order to meet the demands of their changing environment. Snakes are one of the most under-appreciated animals, in my opinion, but I have always found them uniquely graceful and beautiful. Now, I can also admire their grit.