While walking walking through the shady forest on the way to Lava Lake last July, I stopped to look at one of the more unique plants in Montana. As I admired its dangling, urn-shaped flowers,  I noticed a couple dead insects stuck to them. Looking closer, I realized that the flowers were practically covered in tiny beetles, bugs, flies, and wasps, some dead and others still struggling to free themselves. As you might know if you’ve been reading this blog for a while, I’m a carnivorous plant lover, but I’ve never heard this plant, Woodland Pinedrops (Pterospora andromeda) mentioned as a carnivore. I did some research and learned a lot of interesting things about this sticky plant. 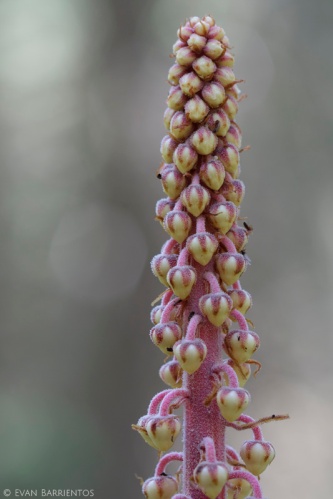 Woodland Pinedrops is a unique plant. In addition to a shape straight out of a Dr. Seuss book, the plant lacks what almost all plants have: green leaves! Instead, its leafless stem is bubblegum pink. This is because pinedrops contains almost no chlorophyll, which means it can’t perform photosynthesis. Instead, this plant has turned to one of the classic tricks of evolution: parasitism.

While there are some parasitic plants that steal nutrients directly from the roots of other plants, pinedrops acquires all its carbon from michrorrhyzal fungi, which grow in forest soils and provide minerals to coniferous trees in exchange for carbon. Somewhere in evolutionary history, Woodland Pinedrops realized it could skip making its own carbon if it could just steal it from the fungi around its roots.

But Woodland Pinedrops’ fungal relationship gets even more complicated. Scientists have learned that pinedrops can only exist in the presence of three species of fungi, all in the same genus, Rhizopogon, across it’s entire range. To put that in perspective, Woodland Pinedrops grows from Vermont to Washington and down into Mexico, yet it has evolved to cooperate with only three species. This relationship is so essential that perfectly healthy pinedrop seeds will only germinate in the presence of one of these fungi. Possibly as a result of this high degree of specialization, Woodland Pinedrops is listed as threatened in Michigan and endangered in New York, Vermont, and Wisconsin. Luckily for me, it’s quite common in Montana.

Surprisingly, pinedrops are in the same family as blueberries. The only physical resemblance I can see is their urn-shaped flowers, which prevent short-tongued insects from accessing its nectar. It’s pretty common for the shape of flowers to prevent certain insects from reaching their nectar, but I don’t understand why pinedrops has deployed such a violent strategy of killing every small insect to land on it. During my research, I came across many sites and articles that mentioned the sticky glands covering the plant, but not a single one offered an explanation for their purpose, let alone mention the fact that they trap countless insects. I’m starting to wonder if anyone has even noticed that they do this! My own guess is that pinedrops is sticky in order to deter small insects like aphids from sucking its juices. I wonder if its red color appeals to long-tongued pollinators.

Once again, reading about a curious organism turned into a really interesting venture. Thanks to research done by others there’s a heck of a lot to appreciate about pinedrops, but there’s even more that remains unknown.